NEXT MEETING: Wednesday, July 20, 2022, 6PM: The GCAS monthly in-person general meeting returns to the Roundup Lodge in San Lorenzo (Mimbres Valley) near the junction of Highways 152 and 35. Start at 6PM with your own plates/utensils/beverage & a dish for yourself or to share. Brief general meeting at 6:45 PM before introducing the evening's feature presentation by the GCAS's friend Dr. Bob Stokes, chair of ENMU's Archaeology Department, who will present his team's Preliminary Results from ENMU's 2021 Summer Field School at the Mares Rockshelter, a Jornada Mogollon Site along the Lower Rio Grande near Radium Springs. Watch this space and follow our blog for any adjustments of times, potluck procedures, etc. In order to offer our members a safe and comfortable experience the GCAS follows CDC and New Mexico Department of Health guidelines for indoor gatherings including masking, distancing, and vaccinations. We recommend all attendees follow the same.

NEXT FIELD TRIP: Saturday, June 25, 2022, 10:00AM-12:00PM noon, is the GCAS's traditional "July" field trip! Visit the 2022 Archaeology Fair hosted by Archaeology Southwest and the University of Arizona's Preservation Archaeology Field School at Gila River Farm in Cliff, New Mexico. The public is welcome and it's free of charge, so join GCAS members in learning about the project team's current archaeological investigations. Eye-catching informational exhibits will be on display, and the project team will offer hands-on activities to visitors of all ages. From the junction of Highways 180 and 211 in Cliff, drive 1 mile north, keep left (north) on Highway 293 and drive to Mile Marker 4. Just past MM 4, turn right into a driveway with a small sign that says, "Gila River Farm." Please use the parking area next to the large building down the driveway. Contact Archaeology Southwest with further questions. Safety measures will be in place, so please be prepared to wear a mask and keep a safe distance. See you at the Fair!

The Grant County Archaeological Society is a 501(c)(3) nonprofit corporation that works and raises funds to preserve and protect prehistoric, historic, and culturally significant places and objects by offering educational and aesthetic programs to the public; and by developing meaningful collaboration among governmental agencies, educational institutions, museums, archeological organizations, professional and amateur archaeologists, and other individuals.

During past decades GCAS members assisted in numerous archaeological excavations – in some instances, with special permits from the US Forest Service for the Smithsonian Institution and Beloit College, Wisconsin; in other cases, with excavation work on private land with the landowner’s permission. Some of the more significant excavations in which the GCAS worked included the Woodrow Ruin on the Gila River; the Mattocks Site/Mimbres Culture Heritage Site on the Mimbres River; ruins in the Burro Mountains; 15,000 year old animal remains at the Patterson gravel pits near Deming; and Site No. 39 in Pinos Altos, New Mexico. 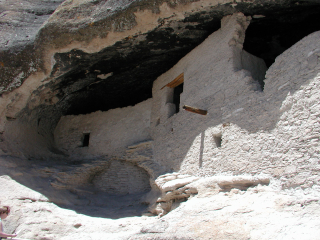 One of the GCAS’s most significant accomplishments was the preservation of the Gila Cliff Dwellings (located about 45 miles north of Silver City) as a National Monument. In 1955 the National Park Service considered removing monument status and returning the cliff dwellings and related sites to the surrounding Gila Wilderness Area. However, a coalition of long-time residents, caretakers, concerned citizens, and GCAS members successfully convinced the National Park Service to not just save the archaeological sites that had been in the Monument, but to expand the Monument’s boundaries to include the large (and mostly unexcavated) TJ ruin as well as many smaller ruins nearby. The GCAS later helped influence the National Park Service to repair and reinforce some of the ancient structures and build a better access road. The result was that instead of the average 100 or so visitors per year who came to the Cliff Dwellings during the 1940s-1950s, an average of 60,000 people visited from around the world in the mid-1990s. Today, the National Park Service reports that the Cliff Dwellings received almost 79,000 visitors in 2017; and during just January and February, 2018, 9201 visitors already were enjoying the sites protected within the National Monument.

In a later-occurring case, one GCAS member was so moved by the obvious neglect and exposure to vandalism to which the 1940s-era site of Father Aull’s mission and health clinic near Santa Clara in Grant County was subjected, she published a research paper on the site’s history and significance and submitted it to the Bureau of Land Management (BLM) for consideration.  Her research impelled BLM officials to inspect the site several times, led by GCAS members. Eventually, based on her research and the site visits, the BLM requested an act of Congress to transfer jurisdiction and ownership of the mission grounds from themselves to the St. Vincent de Paul Catholic Church of Silver City for better security.

Many of our members throughout the decades have been dedicated – and highly esteemed – lifelong amateur archaeologists. Our membership was actively engaged in developing and building a facsimile of a Mimbres surface room on behalf of the Fleming Hall Museum at Western New Mexico University, to better illustrate to the public how such an ancient structure may have looked. Some members have, upon their passing, arranged for their personal collections of pottery, artifacts, and libraries to be donated to area museums including the Deming-Luna Mimbres Museum.

From 2001 through 2004, on behalf of the Gila National Forest our GCAS members recorded the numerous petroglyphs and other features of the roughly-1000-year-old Dragonfly Petroglyph Site, directly resulting in its formal recognition in 2003 as an archaeological site worthy of protection. To this day GCAS volunteers continue to monitor, interpret, and protect the site through the New Mexico Site Watch program.

Since 2004 and continuing, a succession of GCAS volunteers have worked with and under the supervision of archaeologist Barbara J. Roth, PhD, upon a number of the archaeological excavations she has performed through the University of Nevada at Las Vegas. The GCAS has supported Dr. Roth's work on the Mimbres-Mogollon site excavations at: La Gila Encantada (2004-2005); the Harris Site in the Mimbres River Valley (2006-2013); the Stewart Pueblo (2012-2013); and the Elk Ridge Site in the Mimbres River Valley (2014-2017). 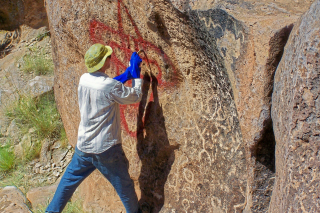 trust to mitigate vandalism of a panel of petroglyphs. After research and consultation with state archaeologists and rock art restoration specialists, the GCAS members used non-invasive materials and equipment to successfully remove a large red spray-painted image, nicknamed "The Bandito," from the rock panel as well as a second, smaller version of "The Bandito" spray-painted nearby. The GCAS feels fortunate that we are not often called upon to perform this particular kind of volunteer work, but our members stand by to help when and where we are needed.

Today, we continue with our mission of educating and informing the public of our region's rich and diverse heritage. We aim to inspire people of all ages and backgrounds to protect and preserve the prehistoric and historic treasures we find throughout our area. We sponsor hands-on indoor and outdoor educational programs for adults and children at local events and schools. Our group's volunteers perform rock art recording projects and assist at archaeological excavations. Certain members have participated in reconstructions of Mimbres pottery. Others lead groups on educational tours of significant sites. Several of our members participate in an even broader volunteer scope with the New Mexico SiteWatch, a statewide stewardship program whose goal is to protect archaeologically and historically significant sites from vandalism and looting. GCAS members are especially active at the Mattocks Ruin/Mimbres Culture Heritage Site, where they continue to donate their time and skills to guiding public tours, and creating and installing outdoor exhibits as well as indoor displays for the museum.

Except for a short period during the 1950s (until the current COVID-19 pandemic in 2020) the GCAS has met regularly in various locations in the Silver City and Mimbres Valley area. Our Board of Trustees meets quarterly in March, June, September, and December. We hold our general meetings on the third Wednesday of each month for business followed by a program with a featured speaker.  We have enjoyed many notable speakers at our general meetings, from local experts and professionals to well-known authors, educators, and representatives of the U.S. Forest Service and National Park Service. As but one example, during the club’s early years archaeologists Harriet and Burton Cosgrove, who were themselves GCAS members, often spoke to the group about the several sites they had excavated in the region. From October through April we hold our general meetings in Silver City at 2045 Memory Lane.  From May through September we meet in Mimbres at the Roundup Lodge, 91 Acklin Hill Road where we precede each meeting with a lavish potluck dinner. We occasionally hold meetings at other locations to be announced. Anyone who wishes to attend is welcome at all our general meetings.

To promote our mission of education, since its inception the GCAS has nearly always arranged

monthly field trips to sites of archaeological, cultural, or historical significance. They are usually scheduled on the first Sunday of each month and are generally open to GCAS members and their invited guests. Most field trips are within the Grant, Luna, and Catron County area but once a year we try to schedule a weekend or multi-day trip to a major site in a more distant location in New Mexico, Arizona, or other state. Occasionally we arrange certain special archaeological trips across the border into sites in Mexico.

The GCAS periodically donates funds and reference materials directly to our local Silver City Public Library. Additionally the GCAS purchased the library of archaeologist Charles Di Peso, then donated the entire collection to the Silver City Public Library for everyone to enjoy. The GCAS membership has spent decades collecting and curating a large number of other assorted archaeological and historical books and research papers for their own archives, which are currently located at the Mimbres Culture Heritage Site. We continue to work on improving our library to make its contents more accessible to researchers, students of all ages, and the broader public.

We regularly join in numerous statewide archaeological meetings and workshops as well as local activities, projects, and events. Certain of our members, including William Hudson and Marilyn Markel, regularly provide instructional presentations and indoor/outdoor archaeological tours and heritage projects with the youth from area schools; many of these students represent the youngest generation of families who have lived and worked in the Grant County area for centuries.

Through the years the GCAS has donated funds to various archaeological sites as well as for scholarships on behalf of anthropology and archaeology students. GCAS members have written letters to public agencies and elected representatives to promote and support the establishment of new archaeological sites as parks, monuments, or interpretive sites, and to advocate the protection and preservation of the sites already in the public domain.

The GCAS shares with other archaeological groups the hosting of the annual conference of its longtime parent affiliate, the Archaeological Society of New Mexico, on a regular rotating basis. We enjoyed hosting the last statewide conference in April 2019; and we look forward to our next opportunity to host the conference in our area.

In recent years the GCAS mission has slightly shifted from its former emphasis on excavation because archaeological digs in the area have become less frequent. The club’s primary work today is applying monetary donations and members’ direct volunteer participation to the issues of education, preservation, and protection of the rich history and prehistory we continue to discover throughout our region.

Much of the foregoing history of the GCAS's early years was researched, compiled, and published in 1997 by GCAS members Carol Baumgartner, Audrey Hartshorne, Jim Hartshorne, Florence Jones, Judy Jones, Josh Joslin, Liz Kinneberg, Jeff Young, and Pat Young. We GCAS members of today salute those who have gone before us. Other contributors to this page include Marilyn Markel and Marianne Smith.

Officers and Board of Trustees