NEXT MEETING: Wednesday, December 15, 2021, online via Zoom, it's the GCAS special holiday meeting starting at the very special time of 6:00 PM. It may not be a “party” in our group's traditional sense, but we anticipate having a slideshow of archaeological images of solstice markers, followed by a slideshow of the AMAZING progress on our new Library and Workspace/Lab in the Wood House at the Mimbres Culture Heritage Site, and a reading of Marilyn Markel's annual poem wrapping up the year behind us. If any member has anything they wish to contribute to the fun, be it slideshows, games, announcements, or any etc., please contact Kyle ASAP at kyyote@msn.com . The more the merrier!

NEXT FIELD TRIP = TBA - watch this space for details as they develop.

This following announcement of Old Pueblo Archaeology Center regarding one of their regularly scheduled "Third Thursday Food for Thought" programs bears special interest for the GCAS and others in our area. Consider saving the date: Thursday, March 18, 2021. 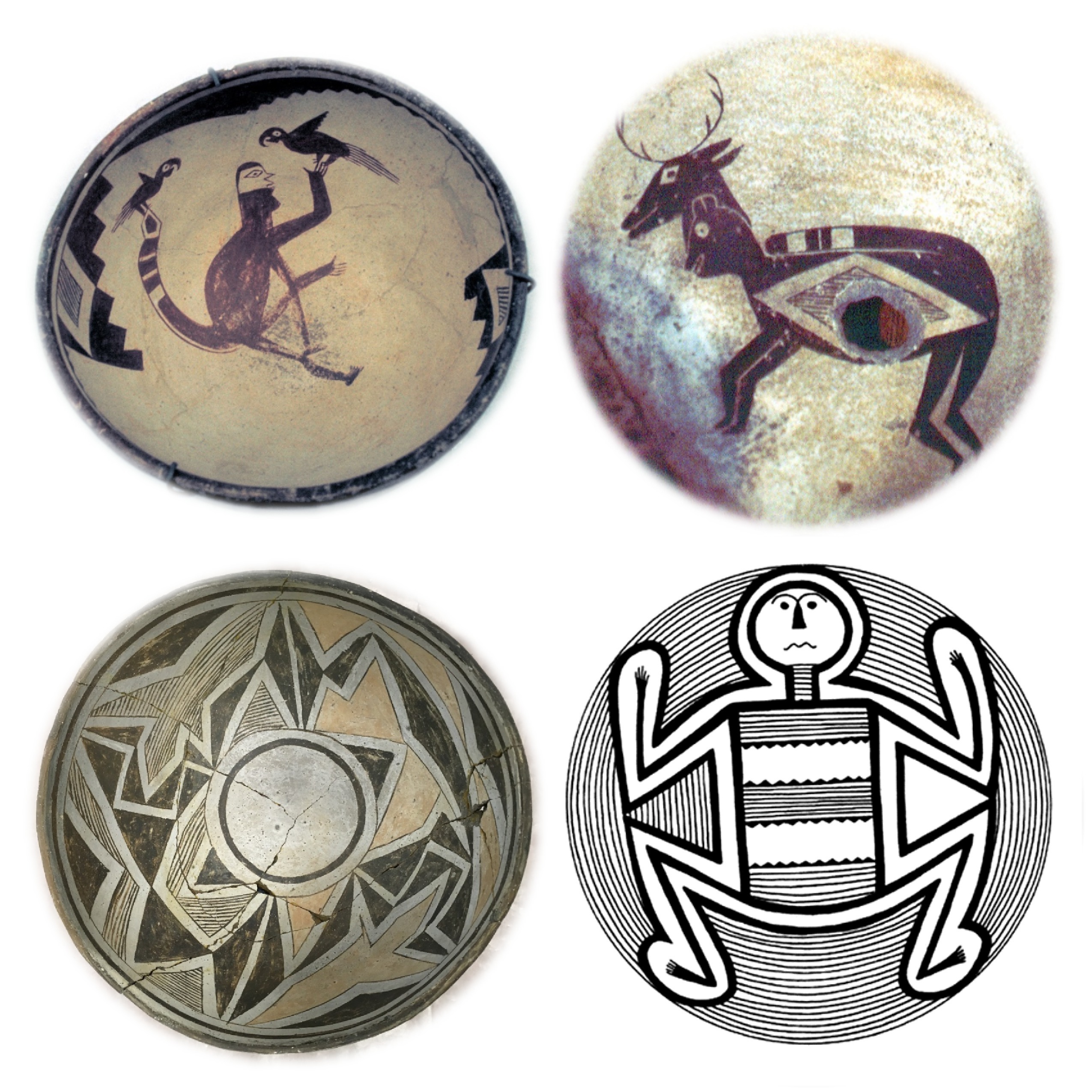 The ancient Mimbres people of southwestern New Mexico were interesting not only for their famous pottery, but also as “players” in the larger history of the ancient Southwest. We consider Mimbres history in context of its times: Hohokam up to about 1000 CE; Chaco from 1000 to 1150; and the run-up to Paquimé/Casas Grandes from 1150 to 1250. Mimbres began as pithouse villages making red-on-brown pottery (much like Hohokam red-on-buff) and developing Hohokam-inspired canal irrigation systems in the Chihuahua Desert. Around 1000 Hohokam waned as Chaco waxed – the “Pueblo II Expansion” of old textbooks.

Color images on some Classic Mimbres pottery bowls
in the University of Colorado Museum of Natural History,
and drawing of a Mimbres bowl from the Saige-McFarland site, courtesy of Stephen H. Lekson

Emil Haury, long ago, identified 1000 as approximately the time Mimbres was transformed into stone pueblos making black-on-white pottery; he insisted that Mimbres (a subset of the larger Mogollon region) essentially ceased being Mogollon and became much more Anasazi-like. Mimbres flourished while Chaco flourished, from 1000 to shortly before 1150. Political shifts after 1125 at Chaco were reflected at the same time by mass depopulation and social change in the Mimbres river valleys. Post-Mimbres people moved south into the desert, and formed new communities in mud-walled-pueblo villages (some of considerable size) with little or no locally produced painted pottery. Those post-Mimbres societies almost certainly contributed substantially to the base population for Paquimé, the Casas Grandes regional center from 1300 to 1450.

To register for the Zoom meeting go to https://zoom.us/webinar/register/WN_SX6CKc5dTxGpCHJEuhfc2g. For more information contact Old Pueblo at info@oldpueblo.org or 520-798-1201.

Posted at 06:00 AM in Ceramics, Current Affairs, Mimbres-Mogollon | Permalink | Comments (0)

This is only a preview. Your comment has not yet been posted.

The letters and numbers you entered did not match the image. Please try again.

As a final step before posting your comment, enter the letters and numbers you see in the image below. This prevents automated programs from posting comments.

Having trouble reading this image? View an alternate.

(Name and email address are required. Email address will not be displayed with the comment.)