NEXT MEETING: Wednesday, February 15, 2023, 5:00PM: The GCAS monthly IN-PERSON general meeting meets again at 2045 Memory Lane in Silver City, New Mexico. about a block or two south of the intersection of Memory Lane and Hwy 180. Doors open at 5PM for folks to socialize and get settled. Light refreshments provided and OK to bring your own light snacks or handy meal (burrito, etc.) and beverage. Meeting starts at 5:30PM sharp with a brief to nonexistent business meeting followed at 5:45PM by our featured speaker, the redoubtable archaeologist Chris Adams. Chris will showcase for us the Feather Imagery Depicted on Mimbres Pottery. Expect meeting to adjourn about 7:00PM. As ever, in order to offer our members a safe and comfortable experience the GCAS follows CDC and New Mexico Department of Health guidelines for indoor gatherings including masking, distancing, and vaccinations. We recommend all attendees follow the same.

NEXT FIELD TRIP: February 5, 2023, we will meet at 10:00 AM at the MAREC HQ at the Mimbres Culture Heritage Site. We will have the Allard Bartlett and George Coleman collections on display with other select items including the GCAS's replica Clovis tool kit and a comparative sampling of artifact seashells and their modern counterparts. Possible trip to the nearby McAnally site may be included!

Have You Visited the Amerind Museum Yet?

If you have ever traveled along Interstate 10 in Arizona between Willcox and Benson, you may have spotted a small roadside sign in the Dragoon Mountains [photo on left via Creative Commons] directing you to the Amerind Museum off of Exit 318. The idea of a museum located in such a beautiful natural setting may have piqued your interest, but at 75 mph you were already past the exit to give much thought to a detour.

How about taking a detour there now?

Continue reading "Have You Visited the Amerind Museum Yet?" »

Our GCAS Library: a Work in Progress

The GCAS Library's Checkered Past:

every nonprofit corporation is required to keep. During our group's 90-year life, we have gradually built our Library with specific purchases; past and current GCAS members and our supporters in the community have also generously donated their personal collections of relevant books and papers. We are grateful to have acquired a lot of fascinating archeological literature and related materials in this way. We welcome everyone's kind offers.

Our acquisitions have been complicated until recently by the lack of a permanent place to store them. Until just a few years ago our GCAS Library had led a nomadic existence, stored in boxes and bins in a succession of temporary locations. They were often separated and stored at the homes of various GCAS members who made room for them for as long as they could. It had been the library equivalent of couch-surfing. For most of our 90 years. That's a lot of couches. We all knew our group possessed many items worthy of safekeeping, but under the circumstances almost all of it was impossible to use except by a few long-term members who remembered what was stored in whose home.

Continue reading "Our GCAS Library: a Work in Progress" »

Posted at 06:00 AM in Current Affairs, Education, Get Involved, Volunteering | Permalink | Comments (0)

the rock left no written explanation of the images and little to no oral history to guide the present-day viewer. Therefore, all interpretations can be considered. Total eclipse or coronal mass ejection? Could be either. Could be both.

In 1992, the image on the right there [via The Journal] was discovered on a rock panel by participants of a field school/archaeological excavation in Chaco Canyon. (Such a find is reason enough to volunteer for a field school.) It looks like an image of the sun to most people. The rock panel on which it was pecked is now named Piedra del Sol (Rock of the Sun) in its honor. However, it might depict more than just an artistic sun design.

Posted at 06:00 AM in Archaeology, Petroglyphs, Puebloan Culture, US Southwest | Permalink | Comments (0)

Within the boundaries of White Sands National Monument, scientists have found tens of thousands of ancient trackways made by Pleistocene-era bison, camels, mammoths, and ground sloths in what was then the gypsum-rich sediment of a lake surrounded by savanna. Ground sloths, which stood 7 to 8 feet tall when standing upon their hind legs, became extinct about 11,700 years ago. Some anthropologists have speculated that human predation was a significant factor in their extinction. Recent discoveries of several preserved trackways of both ground sloths and humans interacting with one another in White Sands' former lake bed support that suggestion.

[The photo in the upper left was taken in the White Sands research area. It shows a barefoot human footprint (curve of heel on left, toe imprints to the right) inside a giant sloth’s crescent-shaped print. Photo by National Park Service via Associated Press.]

Please Leave Potsherds Where You Find Them

Humans, like crows, are acquisitive by nature. We are attracted to pretty things and are

especially intrigued when it's clear to us that other, ancient humans made the pretty things we find -- like the fascinating forms, lines, colors, and textures of potsherds.

In past decades, collecting potsherds - and even far more substantial artifacts - was considered a harmless pastime perhaps similar to collecting postage stamps. Archaeologists have spent more than a century analyzing hundreds of ceramic styles in the US Southwest and the locations where they have been found; so it would be easy to assume that a few potsherds more or less would make little scientific difference.

Continue reading "Please Leave Potsherds Where You Find Them" »

Happy Birthday To Us!

Continue reading "Happy Birthday To Us!" »

This story was originally published by Reveal from The Center for Investigative Reporting, a nonprofit news organization based in the San Francisco Bay Area. Learn more at revealnews.org and subscribe to the Reveal podcast, produced with PRX, at revealnews.org/podcast.

The Bureau of Land Management posted a 77-page report online that included unique identifiers for priceless artifacts as it prepared to auction the most archaeologically rich lands ever offered for industrial use. The report exposed ruins spanning 13,000 years of Native American history to vandalism and looting, and experts say the BLM violated federal regulations that prohibit publicly sharing information about antiquities.

Lonnie Ludeman, Conference Chair for the 20th Biennial Mogollon Archaeology Conference, has announced that the conference is scheduled for NMSU in Las Cruces, New Mexico, from October 11-13, 2018; and is open to GCAS members to attend.

Ludeman explains, "There will be two full days of paper presentations by leaders in the field...Registration and Conference information is available at the web site http://www.lonjul.net/mog2018/; and early registration saves $10. Hope to see many of you there. The banquet will feature a presentation by Dr. Harry J. Shafer and promises to be very interesting."

Following, as a PDF file, is the Conference's Call For Papers. The deadline to submit abstracts for presentation at the 20th Biennial Mogollon Archaeology Conference is August 1, 2018. Details can likewise be found at http://www.lonjul.net/mog2018/

Mexico, to visit the Gila River Farm's open house and 2018 Archaeology Fair presented by the University of Arizona field school and Archaeology Southwest. The field school had prepared a number of informational displays that described all aspects of this year's excavation, including plant analysis, lithic typology, ceramics identification, and much more. Visitors were even encouraged to use a replica stone axe to try shaping wood for a post. We learned that it takes practice. Good times were had by all and sundry.

Please Call and Write Your Senators!

[Image - a reconstruction of what Chaco may have looked like when occupied - by National Park Service, via Ancient Origins.net] 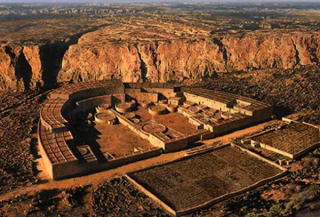 S.2907 was introduced on the Senate floor on May 22, 2018, and referred to the Senate Energy and Natural resources Committee. The time to support this bill is now.

On June 20, 2018, at the GCAS's Board of Trustees meeting and our subsequent general meeting, the GCAS membership unanimously agreed to add the GCAS as a signatory to the following letter. We would encourage all our readers - organizations and individuals (with slight editing to the opening sentence) - to do the same. If readers happen to live outside the state of New Mexico, please also contact your own state's Senators to support S.2907:

Posted at 06:00 AM in Archaeology, Current Affairs, Get Involved, Puebloan Culture, US Southwest | Permalink | Comments (0)