NEXT MEETING: Wednesday, February 15, 2023, 5:00PM: The GCAS monthly IN-PERSON general meeting meets again at 2045 Memory Lane in Silver City, New Mexico. about a block or two south of the intersection of Memory Lane and Hwy 180. Doors open at 5PM for folks to socialize and get settled. Light refreshments provided and OK to bring your own light snacks or handy meal (burrito, etc.) and beverage. Meeting starts at 5:30PM sharp with a brief to nonexistent business meeting followed at 5:45PM by our featured speaker, the redoubtable archaeologist Chris Adams. Chris will showcase for us the Feather Imagery Depicted on Mimbres Pottery. Expect meeting to adjourn about 7:00PM. As ever, in order to offer our members a safe and comfortable experience the GCAS follows CDC and New Mexico Department of Health guidelines for indoor gatherings including masking, distancing, and vaccinations. We recommend all attendees follow the same.

NEXT FIELD TRIP: February 5, 2023, we will meet at 10:00 AM at the MAREC HQ at the Mimbres Culture Heritage Site. We will have the Allard Bartlett and George Coleman collections on display with other select items including the GCAS's replica Clovis tool kit and a comparative sampling of artifact seashells and their modern counterparts. Possible trip to the nearby McAnally site may be included! 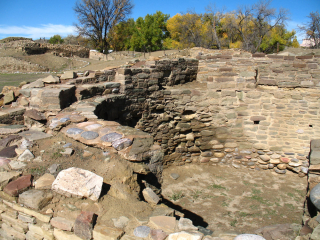 The Salmon Pueblo Archaeological Research Collection (SPARC) is an ongoing project and online resource that allows users to search over 140,500 records including approximately 13,000 photographs, 29,000 documents, and 24 data tables with information on particular artifact types, such as ceramics vessels, ornaments, and bone tools. These records were compiled during the comprehensive excavations of the Salmon Pueblo led by the late archaeologist Dr. Cynthia Irwin-Williams. SPARC notes that, thanks to Dr. Irwin-Williams and others, the Salmon Pueblo "...is the only Chacoan great house in the American Southwest to be comprehensively excavated in the last 40 years. "

SPARC's goal is to "...enhance access to archaeological research on Chaco Canyon, New Mexico..." which includes not only the ruins within Chaco Canyon National Historic Park proper, but also those of the Salmon Pueblo some 45 miles distant and the ancient Puebloan roads that connected them. SPARC's work is especially important today, because all these ancient roads and structures - nonrenewable resources in and of themselves - are under threat of destruction from drilling by corporate interests in the extraction industry.

On May 16, 2018, one of our GCAS members, William Hudson, was recognized for his tireless and outstanding volunteer work on behalf of archaeology and education.

Here is how Bill described his award in his post on the GCAS Facebook page that evening:

Everyone knows that modesty is a virtue, but there is much more to Bill's achievement than what he described as simply "contributions by an individual other than a professional archaeologist." Bill has most certainly contributed to the mission of the GCAS and to the greater mission of educating the public of the archaeological heritage we all share.

I have been remiss in not disclosing that our group dined - and well - while in Mexico. No photos were taken of the excellent seafood restaurant our guide Luis introduced us to in Janos; but we had a more traditional lunch experience in a small hotel in Mata Ortiz that had little trouble in providing our group of 16 gabachos with a classic lunch of chiles rellenos, tacos, and much, much more.  (h/t Marcia Corl for the dining photo up there on the left; webmaster focused instead on the chile ristras along the garden portal.)

Day 3: May 4, 2018. We arrived in Paquimé. The site's thick adobe walls may be slowly dissolving back into the earth, but it remains an awe-inspiring sight to look out over Paquimé's grand plaza, its ceremonial structures, and its residential areas comprising some 1700 rooms.

The second half of Day 2, May 3, 2018, comprised a tour of the area's historic structures, including a charming 1930s-era church in Juan Mata Ortiz.

In stark contrast to the small, well-tended church and grounds in Mata Ortiz, were

the ruins of Hacienda San Diego, one of the mansions belonging to the early 20th-Century cattle baron Luis Terrazas. During the First Gilded Age, Luis Terrazas amassed a combined total of 7 million acres of ranch land, over 500,000 head of cattle, and a few hundred thousand head of horses, mules, and sheep. He was reputed at the time to be the largest individual land owner in the Americas. During the Mexican Revolution of 1916, Pancho Villa used his position as provisional governor to confiscate

Terrazas's land and slaughter all the livestock to feed the revolutionary army.

(This is an avocational archaeological website, so I will not personally comment upon the politics of the Terrazas-Villa era. I will leave it up to discerning websurfers to determine for themselves whether or not certain remarks are factually attributable to Luis Terrazas, such as, "Chihuahua comprises the largest part of my ranch," and "I am not from Chihuahua. Chihuahua is mine.")

Marcia Corl, an archaeology enthusiast from Las Cruces, joined us on our international field trip to 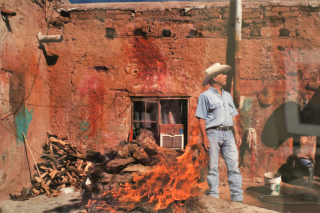 Paquimé. In today's post please enjoy some of her portraits of the people living and working in the ceramics center of Juan Mata Ortiz. All photos you see in this post are Marcia Corl's, EXCEPT this large one over here on the right. Marcia says that this particular one is a photo she took of another photo that she saw hanging in one of the Mata Ortiz galleries we visited. Marcia says that this is a portrait of Juan Quezada himself, shown firing Mata Ortiz ceramics the Old Skool way - using a flaming pile of wood and cow pies. However, an image of Juan Quezada seems to be an apt introduction to the rest of Marcia's own photos of the artisans and residents of his home town. (As always, hover on a photo for a caption; and click on any photo to enlarge.)

"​I had no idea what to expect when I learned I was able to go with this bright and energetic group to Mata Ortiz and Paquimé.  I had told myself that I was not going to spend any money on pots (which I had very little room for in my house), but the trip was going to be a learning experience anyway.  Never had seen Paquimé either. We

saved the second day of the trip for the Mata Ortiz visit. I expected to drive up to some sort of Plaza where we would find everyone with their wares, but our first stop was at a little adobe house, where I thought Luis (our guide) maybe had some personal business, until we were all escorted into the private house of a potter.  The whole bus was going in!  She had 3 walls of the small front room lined in shelves of pottery, all hand thrown, and

some hand painted with a single-hair brush. The prices were on tape written in dollars below the beautiful objects, ranging from 5 dollars to 200 dollars.  The table she was to demonstrate the fine painting was on the 4th wall.  We all watched with bated breath while she marked the finely decorated white clay pot with a repeat pattern of burnt orange paint between the tiny black design already there.

Day 2: May 3, 2018. Shopping day in the artisans' town of Mata Ortiz. Because the Grant County Archaeological Society embraces art and culture in all its forms. (h/t Marcia Corl for close-up photo of fine ceramics detailing.)

southwest of Nuevo Casas Grandes, Chihuahua, Mexico. It was established in the late 19th Century  as "Pearson," but after the 1916 Mexican Revolution it renamed itself "Juan Mata Ortiz" in memory of an army colonel and local hero who had fought against the Apache. The town's economy had been based exclusively on agriculture, but beginning in the late 1970s/early 1980s a ceramics tradition began to develop that now provides the town and its inhabitants with a more stable and diverse economy than agriculture alone had afforded.

May 2, 2018, the first day of our GCAS international field trip to archaeological and

historic sites in Chihuahua, Mexico, was windy and action-packed. We hiked for about 1/3 mile from La Cueva de la Olla crossing a shallow stream and the valley floor, up a short, steep path to the cave and cliff dwellings of La Cueva de la Golondrina ("Cave of the Swallow"). Occupation of this site has been dated to roughly 1000-1050 CE; somewhat more recent and for a shorter duration than La Cueva de la Olla. (h/t Marcia Corl for far left image.)

cylindrical shape, yet it and the other more conventional, rectangular-shaped adobe rooms at this site used the same defensive techniques of small ventilation windows and narrow, low, T-shaped doorways that seem typical of cliff dwellings of this era throughout northwest Mexico and southwest US.

Facing the cave, the cliff dwellings on the far left appeared more intact than those at La Cueva de la Olla; their walls extended all the way to the cave's roof. Slim rows of latillas in the upper parts of small ventilation windows remained in place despite graffiti etched into the surrounding adobe. Steps carved into the sloping rock were still usable to climb up to the cave floor (see photo on far left). The fine sand of the cave floor itself appeared uniformly flat and smooth, even into the cave's furthermost recesses.

Facing the cave along its upper right side, a long panel of white-painted pictographs came into view.

2018, was a great success. A total of 16 hardy souls participated: four from El Paso; one from Las Cruces; one from Santa Fe; and ten from assorted locales around Grant County, New Mexico. Our tour guide, Luis Benavidez, and his associate, Oscar, took very good care of us while introducing us to points of interest all over the place. That's Luis, over there in that photo on the right.

May 2 found our group in two vans, checking in with Mexican Immigration in Palomas and then riding for about three hours from there to the greater Nuevo Casas Grandes area. Our first archaeological destination of the trip was among the windswept mountains of

the Sierra Madre Occidental near the town of Ignacio Zaragoza. We visited cliff

dwellings in two separate cliff-side caves along the valley of the Rio Piedras Verdes. Luis explained to us that millennia ago this region was somewhat similar to the Mimbres River in New Mexico, in that archaeological sites of small groups of dwellings have been found every few miles along the river and its fertile valley. Human occupation in certain parts of this valley has been dated to 5500 BCE.